THE NBA & CHINA: A GEO-POLITICAL AFFAIR!

<Disclaimer if you enjoy the content you are about to read please “FOLLOW/SUBSCRIBE”. Also, please share this with your family/friends and be sure to visit my home page and/or other categories for more excellent content> 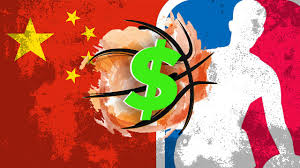 There’s not really a lot complicated about the China/NBA Story. All that happened was the General Manager of the National Basketball Association’s Houston Rockets (Daryl Morey aka Dork Elvis(1)) fired off a Tweet in support of Hong Kong’s Protests (2). The Chinese Government took offence and the NBA twisted itself into a pretzel to try and make amends/do damage control. Considering that Twitter is (for the most part largely) banned in China (3), all the apologies from NBA Super-Stars and the explaining of how little everyone knows about this issue by NBA Brass and Coaches, is remarkably cowardly (4), anti-intellectual and just blind dumb and/or greedy.

For the Head Coach of the Golden State Warriors, Steve Kerr to say this issue is too complicated for him to comment on (5), when his brother-in-law is a Chinese History Professor (6), and Kerr himself is a very cultured and educated man, strikes me as not genuine at all on his part. But maybe I hold Steve Kerr to too high a standard, especially given how he handled his former two-time Finals MVP and his injury (7).

This issue is not complicated. It’s rather simple. In 1997, Hong Kong was no longer considered a British Colony and henceforth has been considered part of China. The deal is that Hong Kong while part of China, gets to operate its’ own form of government which is certainly more democratic in nature than that of the mainland citizens, many of whom live in dire circumstances under President Xi’s Communist regime. The system currently in place is just downright brutal and violent towards its people; in particular the government’s cruelty towards it’s Uigher Muslim citizens, in what one could classify as having these people live in conditions akin to concentration camps (8). The system in place between Hong Kong and China is popularly termed “one country, two systems”(9). A system in place that is becoming increasingly untenable for Chinese citizens living in Hong Kong.

For more thorough information about the origins of the China/Hong Kong Relationship from 1997 to present day, Click on the links here

China now wants to seize more control over Hong Kong and send people of Hong Kong accused of crimes, to the mainland so they can be tried in the most undemocratic of ways. How Steve Kerr doesn’t get that, or how Bill Simmons acts like a shill for his friends in the NBA calling it way too complicated for them to comment on (12), is remarkably disheartening and disappointing.

Okay, in fairness to Bill Simmons, his podcast was informative, and he did broach the topic more head-on than people that are directly affiliated with the NBA. Just that Simmons would have been a lot more honest and transparent if he just said, “This is really complicated to figure out how adversely it is going to affect the NBA’s revenue stream”. He did actually more or less say that, but in protecting his friend Steve Kerr, Simmons makes it seem like this Geo-Political matter between Hong Kong and China is the most advanced of calculus problems, when really, it’s all about POWER! China’s President recently has been making very scary and tangible threats about having bodies smashed! (13).

Very rarely does Geo-political matters and the State of the National Basketball Association intersect like this, but it has, and the NBA gets a failing grade for its handling of this matter (14). They are more concerned with corporate greed much like GOOGLE, APPLE and many other multi-billion-dollar entities who are Head-Quartered in the UNITED STATES (15).  To say otherwise, means either you are truly ignorant, willfully ignorant, or you have a real incentive to protect the NBA Brand because of financial reasons (16), or there are people you want to protect who are tied up in that entity. Quite frankly, it’s rather disappointing, even if it is not entirely surprising.

Granted I am a bit late to the party as this story is now roughly two weeks old, as it has been reverberating throughout the NBA for this entire time. In this era in history where new scandals come and go by the day, this is quite a remarkable feat! Of course when so much money is involved for both sides, there is bound to be a lot of back-channel negotiations, as it seems to be the case per this report from CNN (17).

Of course Commissioner Adam Silver among other NBA and Chinese Officials, hope to turn the page from this very quickly.

However, aside from POTUS#45 (as his M.O.) throwing more kerosene on this already blazing fire (18), there are still very influential NBA players of conscious who are not happy with how things are unfolding (19).

PS – If you enjoyed this post of mine, and are curious to read more about matters of “politics” or things of that nature, I invite you to check this piece of mine out, (which is an oldie but goodie) on Donald Trump’s first 8 days in Office!   https://joshoffthepress.com/2017/01/29/the-opposition-research-files-a-primer-on-what-trump-has-done-during-his-first-eight-days-in-office/

Or if you want more NBA writing from me, check out this one, breaking down the MJ v. LeBron debate! https://joshoffthepress.com/2017/06/02/mj-or-lebron-lebron-or-mj-also-2017-finals-predictions/

SOURCES CITED (in order of appearance)

3- The NBA is afraid of offending China — and so are online platforms by Adi Robertson of Verge.com October 7, 2019

4-  The NBA’s Cowardly Response to China By Jonah Goldberg The National Review October 11, 2019

16-Adam Silver Is Finally Being Judged As a Commissioner, Not As Our Pal Theringer.com by Bryan Curtis October 8, 2019

17-China suspended ties with the NBA last week. Now it’s starting to restore them by CNN Business – Laura He and Yong Xiong, October 14, 2019

21-The NBA Should No Longer Do Business With China By Sports Illustrated Rohan Nadkarni October 8th, 2019

23- Daryl Morey’s Hong Kong Tweet Has Put His Relationship With the Rockets in Limbo Theringer.com by John Gonzalez October 06, 2019

25-The Disillusion and Frustration of a New Generation is Fuelling Hong Kong’s Protests “The New Yorker”’ by Jiayang Fan, July 03, 2019

About: Joshua Pressman Jacobs, aka -Josh Off The Press; A life explorer, adventurer and lover of life. This site is an expression of my "WHY". Topics on this page range from politics, to sports, to popular culture, as well as personal and inspirational stories. Please follow/subscribe & share! https://joshoffthepress.com/ joshoffthepress@gmail.com https://twitter.com/JoshuaPJacobs
View all posts by JoshoffthePress »
« NBA PLAYOFFS 2019 (Late Edition) and my Pick for MVP!!!
Rest in Power, Kobe & Gigi! »